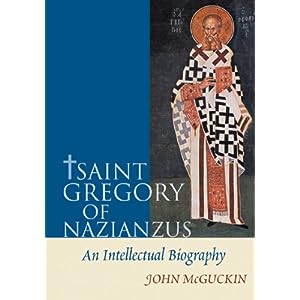 I will capture the flow of Gregory’s life along with crucial highlights. McGuckin’s thesis suggests something along the lines that Gregory “midwifed” a new Christian vision into the old imperium.

Gregory opted for something like a Christian Hellenism, or rather the New Byzantine vision (I understand this language is somewhat anachronistic, since Gregory would have seen himself as a Roman). This method and vision allowed him to bring order to a then inchoate biblical theology. It was a bridge between the Hellenic and Semitic worlds. He was able to hold apparent opposites in creative tensions, and he refused to collapse mystery and symbol into logical deduction (McGuckin10). In fact, in Gregory’s hands Christology is never allowed to escape its proper context of reflection: “the dynamic mystery of the economy of God’s salvation of humankind” (390).

In order to counteract Julian, Christians had to offer an inspiration for a new imperium and society (117ff). Both Gregory and Julian agreed that “a culture cannot be divorced from its religious inspiration without being fatally compromised.” In this battle Gregory forges a keen anti-Hellenic apologetics. Much of it is similar to Augustine, albeit with the promise that Christianity is able to synthesize old and new (121).

Indeed, the birth of Byzantium is the new public confession of the Spirit as homoousion. Gregory’s confession of the Spirit is the positive triumph of what was best in Origen: it is the present spiritualization of the current order and the ascent to divine vision (309). Gregory is able to do what his master could not: correlate the eschatological vision with historical unfolding. Gregory’s social program is connected with his anthropology (151). Image and archetype are reconciled in the hominisation of God as a poor man. The human condition is mixis between clay and divine image.

This is not merely an attack on Eunomios. It is a vision for theology (263). He attacks two theological positions: a) that the Son and Spirit are without cause (agenetos); and b) they are caused by the Father as something other (hetera) to him.

principle of causality: it is something other than what is meant by God’s causing the created order. It indicates the manner in which the Father relates his being to the other two persons.

The Monarchia of the Father

Feasting in the Spirit

The doctrine of the Spirit is the mean between Jewish monism and Hellenic polytheism (273). Jews celebrate feasts by the letter, Greeks in the body. Christians feast in the Spirit. As McGuckin notes, this fits in with Gregory’s “matrix of liturgical discourse.”

It is through the Spirit that the Father is known and the Son glorified. The idiomata do not define the essence, but are themselves defined in relation to the essence. The three stages of revelation are progressively perfected.

This is a hard read. And it is not quite the same “kind” of work as McGuckin’s masterpiece on Cyril. The latter is a theological commentary; this, as the subtitle makes clear, is an intellectual biography. Still, McGuckin’s scholarship is world-class and this is easily the best biography on Gregory.

Interests include patristics, the role of the soul in the human person, analytic theology, Reformed Scholasticism, Medievalism, Substance Metaphysics
View all posts by J. B. Aitken →
This entry was posted in Book Review, Fathers and tagged byzantium, gregory of nazianzus, john mcguckin, monarchia, triadology. Bookmark the permalink.