This book is divided into two parts: a brief treatment of Torrance’s life and an examination of his thought. His parents were missionaries to China and fostered a deep piety and evangelistic zeal in the young Torrance. Torrance grew up reading the bible through each year. His dad could repeat the Psalms and Romans by heart. 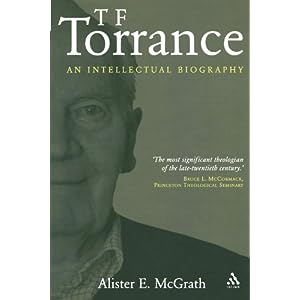 Of particular interest is Torrance’s lectureships in America, ironically at liberal institutions. They were not ready for his evangelistic style of lecturing. Auburn Theological Seminary (largely liberal) invited a 25 year old Thomas Torrance to guest lecture. He ended up evangelizing his students on the deity of Christ. He was invited to teach at Princeton University but they told him it was to be a neutral atmosphere and that he shouldn’t get involved with the students religious beliefs.
Torrance: I make no such promises. He was hired nonetheless.

McGrath skillfully makes use of unpublished mss and shows us a very interesting side of Torrance. Torrance’s life often borders on a heroism found in novels.

Was Torrance a “Barthian?” No. As he made powerfully clear to Donald Macleod he was an “Athanasian” before he was a Barthian. Nevertheless, Torrance’s legacy is connected with Barth’s.

On the reception of Barth

No one is a pure Barthian. McGrath notes the numerous difficulties in Barth’s reception in the English-speaking world. This narrative takes place within Torrance’s “cold war” with John Baillie. McGrath quotes A. Cheyne in suggesting four different ways someone could “receive” Barth’s teachings:

McGrath notes that Barth wasn’t well-received in the Scandinavian Lutheran countries, given Barth’s firm commitment to Reformed Christology. Barth took longer to make headroads into Anglican because, as McGrath ruefully muses, Anglicanism didn’t have much of a dogmatic center (McGrath 122-123). This was not the case in Presbyterian Scotland, which in many ways was a dogmatic center!

McGrath lists four criteria that must be in place if a foreign thinker like Barth is to make headway:
1. Competent translations of the most important works into the new language.
2. A journal dedicated to sympathetic viewpoints.
3. A publishing house which is prepared to handle primary and secondary material.
4. A platform where a rising generation may be influenced.

Torrance’s thought is a Reformed reworking of Athanasius’s insight that the homoousion–the oneness of being between Father and Son–means a oneness of Being-in-Act in God’s saving and revealing himself to us. The doctrine of the Trinity is an outcome of an intellectual engagement with God kata physin. “The nature of God was disclosed to be such that Trinitarian thinking was the only appropriate response to the reality thus encountered” (161). Scientific realism allows direct correlations between self-revelation of God and God himself.

Early Torrance: “revelation is an act in which God confronts us with his person, in which he imparts himself” (Torrance, Christian Doctrine of Revelation, 32, Auburn lectures). If this is the case, how can man “reason upwards to God?” Again, and as always, the solution is found in Athanasius. Knowledge of God and knowledge of the world share the same foundations in the rationality of God the creator.
1. God is in possession of an intrinsic rationality–the divine logos.
2. That logos has become incarnate in Jesus Christ, so that Christology becomes the key to accessing the inner rationality of God.
3. the divine rationality is also seen in the created order, in which the divine logos can be discerned at work in the contingent yet ordered nature of the world.
4. Creation (1-3) makes natural theology possible.

The book is magnificent. Its rather foreboding price prevents it from being an otherwise perfect introduction to Torrance’s thought