Rarely do you find a book that covers a dense topic in a remarkably lucid manner. This is such a book. The book is, as it says it is, a dictionary. It covers *some* terms in Hegelian studies. It does not cover all of them (being around 300 pages). Further, it is aimed at undergraduates, not specialists. With that said, I have found this the most useful introduction to Hegel. Below are some of the highlights. 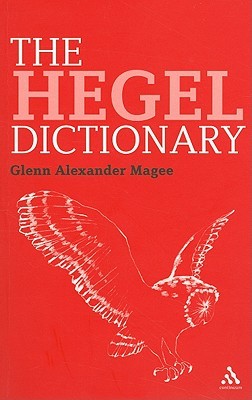 “For Hegel human beings are the self-consciousness of existence itself” (Magee 2). Hegel inverts Aristotle’s chain of being. The lower gives way to the higher. The highest form of consciousness will include self-reflection. The goal of the Absolute is to posit enough in order for it to be an “idea of an idea,” all previous ideas having been sublated.

Earlier philosophers used absolutum to mean “God,” but god defined as a “coincidence of opposites” (Magee 19). Hegel: when the Absolute is conceived as the transcendent unity of all things (cancellation of differences), it is really an empty concept. The Absolute is the whole.
existence exists in order to achieve consciousness of itself (20). Perpetually gives rise to conditions for it to overcome. The final moment is when self-relatedness is achieved through self-consciousness.

Spirit as self-consciousness has a dual object: the thing out there (given in perception) and itself, which is in opposition to the thing. The subject is moved to transform the object out of the desire to confront itself. When a subject wishes to know itself, it must split into a subjective side (which knows) and an objective side (known). Since we desire total self-reflection, this means transforming the object into a mirror of myself (70). This leads to postmodern violence.

Magee focuses on Hegel’s key works (each book given at least a two page treatment), with *most* of the key terms in the book. Key philosophers (Kant, Schelling, Marx) receive substantial treatment.

There is some repetition, but I suppose that can’t be help. Magee concludes with a short but useful bibliography.

Interests include patristics, the role of the soul in the human person, analytic theology, Reformed Scholasticism, Medievalism, Substance Metaphysics
View all posts by J. B. Aitken →
This entry was posted in Book Review, Philosophy and tagged hegel, phenomenology. Bookmark the permalink.