Van Til and a “thrown” world

Van Tillians love to say there are no “uninterpreted facts.”  All facts are already “pre-interpreted by God.”

Now, when you get them to explain just what a “pre-interpreted fact” looks like, that ends much of the discussion.  But I think we can take it a step further.

{1}  There is no such thing as a blank world.  Van Tillians have always been good on this point.

{2} Any such world we find ourselves in already has meaning from a host of relationships.

{3} These relationships constitute a finitude of sorts. We can never rise above our tacit assumptions.

{4} This finitude is embodiment.  We are not simply isolated intellects, but situated intellects–situated and embodied.  We are always embodied individuals and we experience the world as being-in-the-world (per Heidegger).

{5} Worldview talk usually focuses on the intellectual.  And that’s necessary.  But w-v thinkers rarely focus on institutions and cultural practices.   Social structures and our bodily being-in-the-world also function in a “pre-theoretical” (per Dooyeweerd) manner. 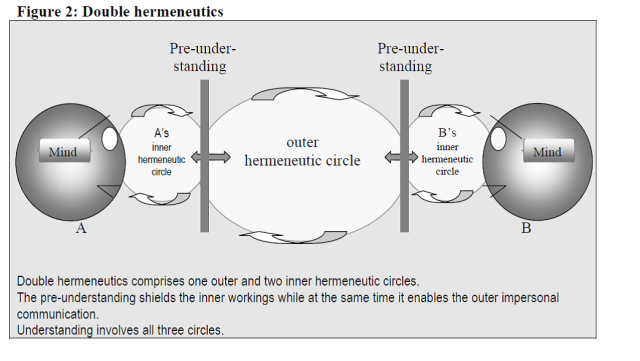 As Jamie Smith says, ““Affect and emotion are part of the ‘background’ I bring with me that constitutes the situation as a certain kind of situation” (35)” Antepredicative knowing–the affective register upon which narrative operates–is processed by the body below the cognitive level (Merleau-Ponty).

{6}  Pre-cognitive perception breaks down the traditional epistemology of subjects and objects.  “The world is not what I think, but what I live through” (Merleau-Ponty).  Our being-in-the-world is between instinct and intellect (43).  We aren’t just thinking-things.  “We don’t have being-in-the-world; we are being-in-the-world” (44).

{7}  Horizon:  background presuppositions and habits.  Horizons operate without our thinking.  I do not consciously invoke my horizons in order to understand the world.  They are social and shared but not a priori or universal.

Martin Heidegger, Being and Time.

Interests include patristics, the role of the soul in the human person, analytic theology, Reformed Scholasticism, Medievalism, Substance Metaphysics
View all posts by J. B. Aitken →
This entry was posted in Philosophy and tagged cornelius van til, gadamer, hermeneutics, james k a smith, merleau ponty. Bookmark the permalink.