Chain of Being (Review)

Arthur Lovejoy analyzes a powerful if flawed concept’s “control” over Western mind since Plato. The chain of being is the continuum of “substance/essence/stuff” beginning with God (or Plato’s Good) and ending with either inorganic life or nothingness itself. The chain of being hinges around three concepts: plenitude, continuity, and gradation. 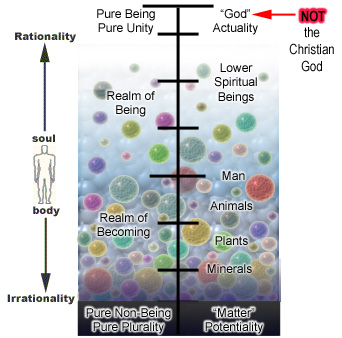 Summary of the Idea

At the top of the chain is pure Being. At the bottom is pure nothingness. Further, Good is coterminous with Being. Thirdly, good is self-diffusive. So far this isn’t too bad. It becomes tricky when it becomes “ontologized.” a) the line between Creator and creature is fuzzy; b) if something is lower on the chain, is it less good? What’s the difference between less good and bad?

This book’s value lies in its being a prime example of clear, penetrating thinking. In each chapter Lovejoy presents a new difficulty with the idea of a chain of being and the force is cumulative. The chain functions as a snapshot of the God-world relationship. Since God is perfect, and the chain is a diffusion of his goodness, and since God is eternally perfect, then we must see this eternal perfection. If not, we have to find “the missing link” (and is not evolution a mere temporalizing of the chain?)

Interests include patristics, the role of the soul in the human person, analytic theology, Reformed Scholasticism, Medievalism, Substance Metaphysics
View all posts by J. B. Aitken →
This entry was posted in Book Review, Philosophy and tagged chain of being, cornelius van til, hellenism, neo platonism, plato. Bookmark the permalink.

4 Responses to Chain of Being (Review)