You are what you love (review)

What we love and desire forms the space for what we know. And so James K. A. Smith reads Augustine’s key phrases in the Confessions. Smith writes: ““In some sense, love is a condition for knowledge” (Smith 7). I love in order to know. As humans we are oriented towards something. 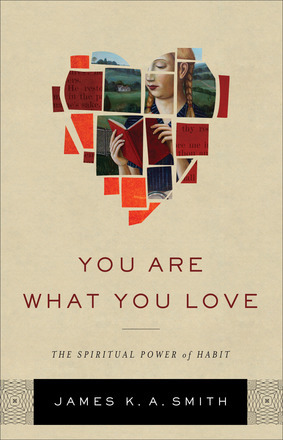 Thus, a teleological existence. Smith and Augustine call attention to Man’s “heart.” It is our subconscious orientation to the world (8). Our heart is always “longing” for something, some ultimate end.

Before he can clinch his argument, Smith calls attention to the virtues. “They are character traits that become woven into who you are so that you are the kind of person who is inclined to be” x, y, z (16), “a disposition that inclines us to achieve the good for which we are made” (89). They are “thick realities tethered to particular communities governed by a particular Story” (159-160).

And if our habits are often formed pre-consciously, then they need radical re-training, hence liturgy. Liturgy for Smith isn’t necessarily smells and bells (or even church-related at all). Rather, “a shorthand term for those rituals that are loaded with an ultimate Story about who we are and what we’re for” (46). A liturgy could be the Book of Common Prayer or it could be a trip to the shopping mall.

Smith ends with a wonderful analysis of the megachurch movement and reasonable proposals to end it without necessarily taking a side in the “worship wars.”

Smith rarely misses an opportunity to attack “intellectualism,” but with the exception of Descartes, we aren’t sure exactly who is guilty of this. He says “new information doesn’t change a deformation” (83), but do we not see the converse in American universities, where the professor speaks of Marxism, Darwinism, and gender fluidity?

In fact, it’s almost as if he attacks “the life of the mind” and disciplines like Scripture memorization are brushed aside (see p.139, 142). And while I heartily agree with his critique of the “seeker-sensitive movement,” no one would ever criticize seeker-sensitive churches for being overly intellectual (or intellectual at all). And I can only conclude by quoting Colossians 3:10 in that we are “restored unto knowledge.”

Smith is a talented writer and it shows. While there is a lot of repetition from his earlier works, his argument is focused. His take on virtue is quite good and his model for pedagogy bears promise. In fact, as a teacher I had been using his take on pedagogy (in short, we are in loco parentis).

Interests include patristics, the role of the soul in the human person, analytic theology, Reformed Scholasticism, Medievalism, Substance Metaphysics
View all posts by J. B. Aitken →
This entry was posted in Book Review and tagged education, ethics, james k a smith, liturgy, sanctification, virtue. Bookmark the permalink.

1 Response to You are what you love (review)