We Believe in One God (Ancient Christian Doctrines)

I think I have found the best primary source intro to the Fathers. The only drawback is the somewhat steep price. Gerald Bray (in this volume) gives a running commentary on the Nicene Creed using only the writings of the Fathers. He examines each clause of the Creed up to “things visible and invisible.” He alerts us to the hermeneutical sensitivities of the Fathers while pointing to areas where they were either lacking or refused to pursue the logical development. For example, the Fathers, unlike moderns today, be they conservative or liberal, were very interested in the role of Angels and demons. Their cosmology, untainted by post-Kantian gnosticism, allowed for such a role. Further, the fathers did not develop the doctrine of God’s foreknowledge and predestination in any real sense. Augustine did the most. 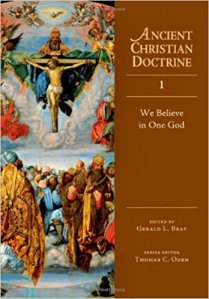 My main problem with the book is the lack of Maximus the Confessor. In this review I will post an extended outline. I am doing that because the reader needs to see the logical and narratival development of the Fathers’ use of the Creed (or pre-creedal formulae). Finally, the reader should note that the Fathers had values that we do not necessarily pursue today, such as apostolic succession. But it should also be noted that the situation then is different than now.

Bray begins each section with a brief contextual introduction, then summarizes roughly each Father, and then gives a litany of Patristic quotations. It is truly grand.

Movement of the Creed

We believe (which covers the gamut from knowledge of God, Scripture as the basis of knowledge [Clement Strom. 7.16], to the canon of Scripture, to the interpretation of Scripture.

Of all that is, Seen

1 Response to We Believe in One God (Ancient Christian Doctrines)