Review: Byzantium and the Rise of Russia

Many people think of the Byzantines as late decadents, lesser sons of great lords. And even at their greatest, so the argument goes, their glory was marred by caesaropapism. Meyendorff helps correct that misunderstnding. 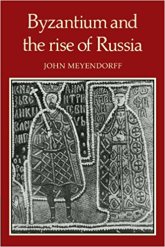 To understand the fading role of the late Byzantime empire, we must see it as aiming for an Orthodox Commonwealth. It was a supranational community of Orthodox Christians headed by Constantinople (262) or, as time would demonstrate, Russia.

This is an important point because as the Byzantine empire faded politically, they found an important spiritual daughter in Mother Russia.

Meyendorff goes on to show that the State, even if it chose patriarchs from time to time, did not control the Church. For example, while the state was held at the mercy of the Mongol Horde, the church leadership kept the country from faltering (incidentally, this is exactly the same thing that the late Patriarch Alexis II did at the transition from Sovietism to the Federation).

Meyendorff gives a good discussion of the Hesychysts. The middle section was rather dense. The final chapters dealing with Lithuania were interesting and tantalizing.

It’s a fine book in that it corrects facile claims of “caesaropapism.” Meyendorff ends with several fascinating suggestions:

Interests include patristics, the role of the soul in the human person, analytic theology, Reformed Scholasticism, Medievalism, Substance Metaphysics
View all posts by J. B. Aitken →
This entry was posted in Book Review, Church History and tagged byzantium, holy russia, meyendorff. Bookmark the permalink.