This is a cliffs-notes version of his longer Unseen Realm. 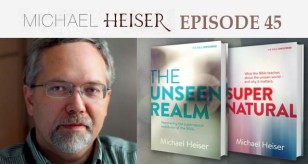 Key argument: “In at least some cases, God decrees what he wants done but gives his supernatural agents freedom to decide what it means” (23).

Genesis says God says “Create in our image” and it says God created in his image.”  Since God is speaking to the Divine council and not the Trinity, this means that the Council and God (and presumably we) have something in common (29). We are to image God’s rule on earth.

The Old Testament never says there was an angelic rebellion (37).  Revelation 12:7-12 is talking about the birth of Christ.  There was another corporate transgression, but it was the beings in Genesis 6. Peter and Jude say that these angels are placed in eternal darkness under chains. If we take 1 Enoch seriously (and Peter and Jude) did, then from these beings came the Nephilim, and when the Nephilim died, their spirits became demons.

Deuteronomy 32 Worldview:  Geography in the Bible is cosmic (52).