Edmund Spenser structured his allegory around the Aristotelian virtues.

This is a modernized version of Book 1 of the Faerie Queene.

Roy Maynard ought to be commended for aiding us in reading Spenser. Personally, I think Spenser tells a better yarn than Shakespeare, with all due respect to the Bard. This book was written by a Christian, with powerful Christian overtones, and Christians will benefit the most from it. 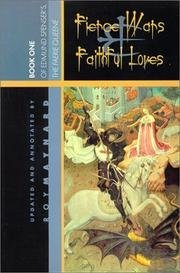 No, the hero is not perfect. Yes, he fails over and over again. But the battles he fights! The nature of forgiveness, pain, guilt, ecstatic joy–Spenser pulld no punches. And to point out another irony of historical revisionism prevalent in the public schools: Spenser has sexual allusions (fear not, for they are used to show, in the words of CS Lewis, “the fierceness of Chastity” and the bloody fight that its worth); even more shocking is that Spenser is a proto-Puritan, thus debunking the whole Puritan “prude” myth. By the way, the true hero in the book is King Arthur, not Redcrosse; you will see why later in the book.

This is Book 2 of the Faerie Queene. 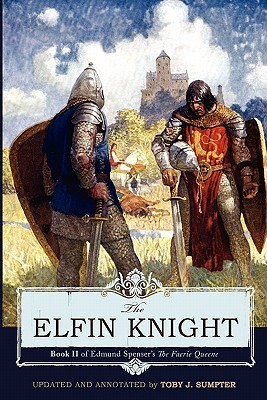 Here is the allegory of Temperance. It follows the standard medieval warrior pilgrimage. Sumpter has done a fine job of modernizing the spelling while retaining the exalted style. However, there are a few flaws with Sumpter’s approach (I am not criticizing his work. It is literally one of a kind and preciously needed). Sumpter ignores (or doesn’t notice) Spenser’s Neo-Platonism. Without understanding Spenser’s commitment to Neo-Platonism, parts of the story are incoherent. Here are some themes that will guide the reader.:

Reason masters passions: “Yet with strong reason mastered passions frail” (VI.40). But this isn’t standard Neo-Platonism of the monkish sort. Passions aren’t bad. They just need to be guided by reason.

*Mediating Spirits. Neo-Platonism of its various forms sees a chain of being connecting all of reality. The material is suspended by the spiritual. Transcendence, therefore, can be found in the lowest link of the chain. Along this chain are mediating spirits (powers, angels, fairies).

*Because of his Neo-Platonism, Spenser sees a greater role for angels than we do today (VIII:1-2). Angels actively engage and empower man and thwart the enemy.

*It seems that Spenser identifies “Temperance” as a “god” (IX.1). Granted, he isn’t using god in the crude polytheistic sense. Rather, temperance seems to be a “power” or even “Archetype.” True, this could be merely poetic license, but given Spenser’s Neo-Platonism, it fits neatly.

*In the Bower of Bliss the heroes (Guyon and Palmer) come across a “false Genius.” If we accept that these characters (Genius et al) are Archetypes, we can then add the standard (neo)Platonic insight that the Archetypes and Forms have causal power. But we have a problem. The “Genius” here is a false Genius, as Spenser clearly argues (XII.47). So clearly this Genius isn’t the real genius, but a shadow one.

Alma’s Castle in Book X illustrates how thoroughly committed to Neo-Platonism (and how familiar with the occult) Spenser was. Sumpter isn’t aware of these connections.

Sumpter misses the implication that Memory has hermetic overtones (Yates 2014). Memory mediates a society’s passing down of Absolute Spirit (Magee 87).
Speculative Philosophy holds up a mirror (speculum) to the Idea itself: it allows the Idea to comprehend itself (88). In fact, following the Kabbalist tradition, the “mirror” allows one to behold the deeper essence of Spirit (120).

This brings us back to the Hermetic Art of Memory. “Imagination” is to evoke from memory the Perennial Philosophy. In other words, to echo Jung, it draws out from within the unconscious.

This is rather speculative. Is this what Spenser really had in mind? I think so. Dame Frances Yates argues that Spenser “inherited much more than Neo-Platonism” (Yates 2001, 112). Spenser describes the man (representing memory) as “of infinite remembrance” (IX.52). Man is finite, not infinite–unless man himself was drawing upon a universal subsconcious. I suggest this is what Spenser had in mind. (Interestingly, Yates comments specifically on this very Canto; 114).

Yates further argues that the structure Spenser gives suggests that Man is a Microcosm of the universe. In Canto 22 we read of a “circle” and a “triangle” with a “quadrate” (cube) in between. The four-sided cube represents the four elements of the world, which is proportioned equally by “seven and nine.” Seven is the number of the planets and nine is the angelic hierarchy. If the cube is between seven and nine, then it is an eight, or an octave. This could also represent the Temple of Solomon.

Spenser’s work is literally the standard by which all other poetry is compared. Even though (or perhaps because of!) he is a Neo-Platonist, Spenser floods the senses (and the soul) with beauty and creates in the reader a desire not only for the good, but for the Beautiful, for the Heroic–indeed, for the Temperate.

This isn’t accidental. If what we have said about Forms/Archetypes’ having causal power, then then we can expect “pullings” upon our soul when reading Spenser.

Spenser’s most memorable creation is the Bower of Bliss (as Lewis said, no prude can read Spenser). Guyon’s actions represent a neat twist in Neo-Platonism. The most temperate action is to go into a frenzy and destroy the Bower. This isn’t what we expect from a Neo-Platonist. Spenser doesn’t negate the passions–he calls them into Reasons’s service, but all the while they remain very, very passional. Spenser may have just squared the circle: he may have just redeemed Neo-Platonism. Guyon isn’t an Anchorite who tries to transcend the realm of passions.

What about Sumpter’s annotations? They are a mixed bag. When Sumpter is explaining ethics, theology, or literary symbolism, his annotations are amazing. When he tries to be funny they are worse than awful. Remember the Ron Swanson style of humor? If you have to try hard to be funny, you aren’t. Hilarity should flow from your very being. You shouldn’t have to strain to be funny. I say that because some of the wannabe funny footnotes seriously distract from the story.