Farrell, Joseph.  LBJ and the Conspiracy to Kill Kennedy. 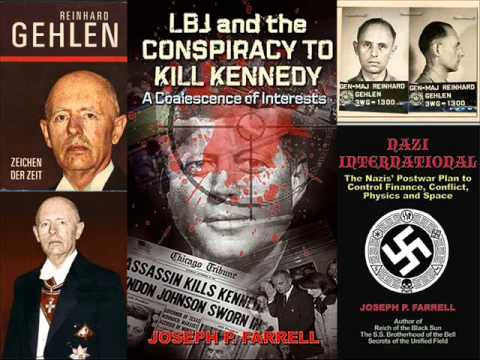 Farrell argues there was a “coalescence of interests” in Kennedy’s murder.  There was no single group. This means that other Kennedy researchers are probably right but do not have the whole picture.  Kennedy analysis breaks down along the following lines:

Who wanted him dead?

How did they actually kill him (e.g., Spanky the Magic Bullet)?

Who actually had the means to pull it off?

Framing the questions this way lets Farrell show the conspiracy as layers within layers.  For example, the Mafia could easily be involved in wanting him dead, but they wouldn’t have had the long-term influence to cover it up.  The CIA, and LBJ, by contrast, could fit all three layers.

Nota Bene: At this point we are not trying to even prove that someone besides Oswald was involved.  We are only noting the people who would have wanted JFK dead and if they would have had any connection with each other.

So you can still believe that Oswald was the greatest marksman of all time.  If Spanky the Magic Bullet is even true, that doesn’t change anything I write.

Chapter 1: A Coalescence of Interests: the groups alleged to have been involved with the assassination of President John F. Kennedy

What is Oswald’s connection to the anti-Castro Cubans?  It was an old office building at 544 Camp Street, New Orleans. It “housed the CIA-created Cuban Revolutionary Council” (28).  Farrell connects the dots: one of its members, Carlos Prios Socarras engaged in gun-running operations to Cuba….to Jack Ruby!

American intelligence’s history with the Mafia dates at least to WWII. Mussolini had outlawed Casa Nostra, which allowed the OSS to use the Mafia as intelligence assets.  The point man was “Lucky Luciano” (32). Italian Mafioso supplied the Allies with locations of Axis troops.

The CIA, FBI, ONI, and NASA

Towards the end of WWII Allen Dulles made a deal with Nazi general, Reinhard Gehlen. Gehlen would use his German intelligence network, Fremde Heer Ost, to spy on the Soviets in exchange, not only for immunity, but he would head the spy agency himself.  The OSS (later the CIA) got its intelligence from Nazis (56ff).

If Oswald was being run by the CIA, then Gehlen’s organization would be the natural point of contact in his getting out of Russia.  How else could a defector leave Russia with the daughter of a GRU colonel?

Nodal points.  These are the complexes of facts that place most (or all) of the main factions at one time in one place.  There are several nodal points: The Permindex Corporation, New Orleans bars, etc.