Review: Roswell and the Reich 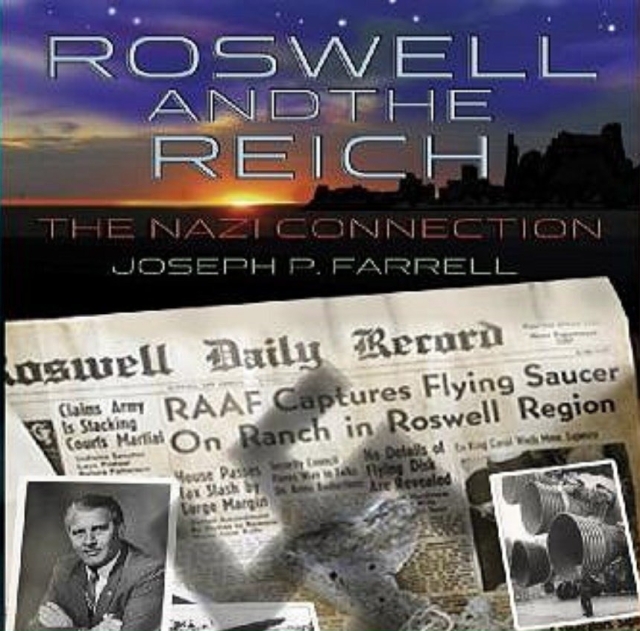 The Roswell investigation functions as a dialectic.  Either the event is so extraordinary that it could only be from outer space, or it is so terrestrial, and hence ordinary, and so should be dismissed.    Farrell attempts (successfully, I think) to break the dialectic by arguing “that the technology, while extraordinary, is within the possibilities of human achievement” and is tied to a wider international context (Farrell 328).

The first news report explicitly stated that a disk, and not debris was recovered at the crash (Farrell 3). No mention of bodies.

Even the later reports that mention bodies only mention one crash site, not two (13).

Problem (ET1): The problem with any ET explanation of Roswell: “If, as is so often alleged, ET’s technology was so far superior to our own as to allow such interstellar reconnaissance, then why would they bother with such antiquated technologies as atom-bombs and rockets” (17)?

Problem (B1) with the balloon hypothesis: Are we to believe that the 509th’s base intelligence offer, Major Jesse Marcel, of the world’s only atomic bomb group could not tell the difference between a weather balloon and a flying saucer (26)?

Problem (ET2): by all accounts the strange writings on the “recovered debris” were recognized as numerals.  Is it likely that aliens would have been using Roman or Arabic numerals (32)?

Problem (B2): How could a flimsy weather balloon’s crash have come to earth so violently and strewn debris over a quarter of a mile (60)?

Problem (B3): What sort of experimental aircraft was being tested in New Mexico…at night…during a thunderstorm” (137)?

Those questions more or less destroy the original “It was a weather balloon” claim.  I think the govt suspected that also, which is why they officially changed the story to a Mogul Balloon (an aircraft that was to track Soviet nuclear tests.  The technology wasn’t all that impressive, yet it was top secret in that its mission was important). But it, too, is open to a damaging criticism:

Problem (B4): “If the debris was from a crashed top secret balloon project, why draw the world’s attention to it with a crazy story about flying saucers” (171)?

The Hot Air Force, The Balloon Hypothesis, and the Skeptics

The govt officially changed its story in June of 1997.

Short definition:  simple photographs of a top secret meeting by the Truman administration for the incoming-Eisenhower.  The “document outlines the crash and recovery of a flying saucer, its occupants, its technologhy” (254).  This is the original set.

Another set of documents released were the “Cooper-Cantwheel” set.

If it were Nazis….

There are three possible scenarios for what happened at Roswell:

But Farrell takes it a step further.  Roswell researchers make a good point: this isn’t a simple hoax, “for it contains too many details that only a very experienced forger would know” (287).  This leads us to several possibilities:

The documents were on 8 ½ x 11 paper, whereas standard govt documents at the time were 8×10.

Wernher von Braun: Hitler’s rocket scientist who was brought to the US in Paperclip (237). Rosin Affidavit.

Hans Kohler: invented a little coil that contained nothing but magnets in a hexagonal pattern.  It contained no power source but was able to produce an electrical current (246).

But here is the kicker: Gehlen made a separate peace with Dulles, resulting in the clean grafting of Nazi spy apparatus to the American clandestine sources.  This was the birth of the CIA” (Jim Keith, quoted in Farrell 347-348).

Farrell explains: one member of the “American oligarchic elite–Allen Dulles–had negotiated a separate peace….with a member of the Nazi elite” (348).

General Gehlen also “transduced” (to use a theological term) a “vast network of emigre fronts,” whom Farrell will argue were influential in the Reagan and Bush administrations (348).

Arthur Rudolph. Principal designer of the Saturn V booster.  Was noted as a “100% NAZI” and fled the US after the moon launch (352).