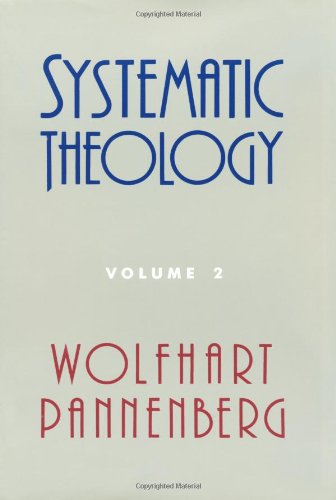 (His name is pronounced “Volf-hart,” not “Wolf-Heart.”  He is not a character in a Twilight fan fiction).

What would a Christology from below look like if it were written by someone who also affirms the eternal pre-existence of the Logos?  Pannenberg gives us an idea.  This volume covers the standard loci one would find in volume 2 of a three volume dogmatics (anthropology, sin, possibly Christology).

His methodology is most obvious in how he approaches the doctrine of Christ. He doesn’t begin with Chalcedonian formulations and then from those deductions, also affirm particularities like the resurrection.  Rather, he begins, as with the apostles, “with what our hands have handled and eyes have seen, the Word of Life.” The apologetic value of such a move is enormous.

This book is quite difficult and is not intended for anything under grad school level readings.  You are in the presence of a master who has read almost everything on everything.  This is the type of theological reflection you did not find in North America until quite recently.

Pannenberg pushes back on the axiom that all outward acts of the Trinity are indivisible.  He says it is a postulate from an extreme view of divine simplicity. The problem is that “the scriptures speak quite freely and expressly of a variety of divine acts….These can be summed up in a collective plural” (Pannenberg 8).

Hegel erred in seeing the Son as the emergence of finitude from the Absolute.  This made creation logically necessary, since the Infinite must produce the Finite.  WP argues that if we see the life of the Trinity in terms of mutual relations we can avoid this problem.  Self-distinction for the persons is a condition of their fellowship in the divine life (29).

We see the idea of the world’s contingency in the Father’s preservation of it in providence.  He has a disappointing take on evolution, since he agrees with it.  But aside from that, he raises an obvious point that Darwin missed: Darwin operated under the strange assumption that creation meant God created every instance of variety all at once.  WP shows there is no reason to believe that, as creation manifests a sequence of forms.

The Spirit of God

Spirit as Field and Force

“Classical dynamics tried to trace the concept of force back to that of the body and impulses that move it, and in this way to base all physics on the body and the relations between bodies” (79).

We are now able to move away from inertial views of force and closer to something like the Bible’s view. Per Leibniz, force (or its manifestation) is not linked to bodies but to spatial points.  Per Faraday, bodies themselves are forms of forces.

Drawing upon his insights in ST 1, WP argues that our view of God-as-Spirit shouldn’t be read in a Middle Platonic nous, but the Spirit of God as a dynamic field that is structured in “Trinitarian fashion, so that the person of the Holy Spirit is one of the personal concretions of the essence of God as Spirit in distinction from the Father and Son….The Person of the Holy Spirit is not himself to be understood as the field but as a unique manifestation (singularity) of the field of divine essentiality” (83).

Personal Unity of Body and Soul

WP urges that we are psychosomatic unities, rather than two juxtaposed essences.  So he rejects substance dualism, which is a problem, but he also refuses to reduce the soul to the body, unlike tendencies of some at Calvin College.

He argues that the soul is deeply rooted in the body (182).  I agree. In older language we would say the body “traduces” the soul. He begins with Genesis 2:7.  We are ensouled bodies, a nephesh hayya.

What is a Spirit

WP is very clear that spirit/Spirit means vital creative force, not merely intellect (185). Whenever we have ruach, we are alive. If God were to withhold his ruach (Job 34:14ff), we would die. Further, a ruach or a pneuma is not the independent creaturely station.  While Paul does speak of human beings as spirit, soul, body, he makes several moves which prove difficult for seeing spirit as soul.

The Image of God

WP gives a thorough survey of “image-theology” in post-Reformation history.  His unique insight is that a theology of the image of God must be linked to human destiny.  This avoids certain conceptual pitfalls in both the Patristics and Post-Reformation thinkers.  It also has a Christological thrust to it.

The Method of Christology

WP gives a rough outline of his “Christology from below.”

The Economy of Christ

The particularity of Jesus is the origin of a new human image, per 1 Cor. 15:49ff (Pannenberg 295). The link lies in the eschatological event of the death of Christ.

The Deity of Jesus

WP notes that the church’s rejoicing over Jerusalem’s destruction (as perhaps in modern preterism) forgets Jesus’s own weeping over it, as well as Paul’s ministry.  It also the future restoration (342).

The Case for the Resurrection

The Christological Development of the Identity of Jesus with God